One of the most common obstacles for entrepreneurs is financial capital. Not only do you have to invest in your business, but you also have to create an income stream, which can be challenging. However, there are some ways to save money and build your business simultaneously.

Contents
The Idea Behind You Smell SoapAbout This Product

For example, if you know how to make soap, you are lucky because soap-making is a relatively simple process with the minimal necessary equipment. All it takes is a little bit of research and trial and error.

In this article, you will learn the story of the woman entrepreneur Megan Cummings who presented her product in the shark tank. Read on to know more about what happens to her product You Smell Soap!

Megan Cummins, the founder of You Smell Soap Brand, started to make luxury soap that had never been made before. She now has two scents on 1200 bars of soap ready for the testing market.

The Idea Behind You Smell Soap

This idea behind You Smell Soap began as an exercise in unique packaging and presentation during a college class. Megan built this into a luxury item because she believed it lead to strong sales from those humble beginnings if the Sharks could help provide capital for the business.

Megan has struggled to support herself while working full-time at another job designing graphics. Megan believed she could make big sales with You Smell, but it was hard for her to support the business since she had a full-time job. She dreamed of one day being able to abandon her day job and join the soap business full-time – that’s when Shark Tank came in!

Let us read more and know everything about this brand.

You Smell is a fragrance brand that makes luxury soap with organic ingredients, shaped like foam. They also make paper wipes for on-the-go freshening. You can find their products in fragrances such as Lemon Verbena and Lavender Mint flavors! 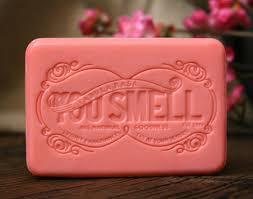 Some interesting facts about You Smell Soap are:

• Made with Shea butter and olive oil, these bars are naturally abundant in vitamins and deeply moisturizing;

• Soaps are genuinely fragrant. They offer an unimagined softness that you can only experience when using a handmade soap bar;

• No parabens or phthalates were used to create this soap- which is vegan and gluten-free. Hand wrapped beautifully for vintage-inspired conversation pieces.

The You Smell Soap Company sent the luxury soap to different stores worldwide to see how it would do in sales and what price point was best. Urban outfitters were interested in carrying their products, a large company with many outlets that may offer their soaps for sale.

Megan has a new invention, “You Smell Paper Soap,” which is easy to use and convenient. It’s sitting on store counters waiting for impulse buyers.

She has thin paper soap that you can carry in your pocket or purse for single use. Her bars of soap will cost roughly $.80 and retail for $2.25. You Smell Soap uses organic ingredients and creatively crafted scents like Lemon Verbena and Lavender Mint. You can find these on Amazon. You can also try their paper wipes if you need something to freshen up when on the go.

Megan came into the Shark Tank looking for a $55,000.00 investment in exchange for a 20% equity stake in the You Smell Soap Business.

Mark Cuban was first to offer her that exact amount she needed and wanted right away before anyone else could offer anything else- negotiations were closed as soon as possible.

Barbara Corcoran jumps into the conversation and says she’s a better investor to partner with than her brother. She also wants 40% of the soap business to make it a success. This offer is even worse because Barbara Corcoran throws on an additional 10 cent royalty for every bar of soap sold.

Daymond John admires Cummings’ tenacity, but he feels that investing in her business is not a game he wants to play. Kevin O’Leary also wishes her luck, but there are too many risks involved without orders on hand and under pressure from the sharks to invest now or walk away empty-handed.

Robert Herjevic, who is usually tough to persuade, at first sight, tries hard to convince Megan into accepting his offer. He said he sees something in her and wants her on the show for help with turning a small business into something bigger.

The Shark wants to take advantage of Megan’s current success as a graphic designer and then suggests that she turn everything over to him – meaning ownership of the company assets would officially transfer from Megan’s name to Mark Cuban after all is settled.

With Robert’s offer of $55k for 20% and a salary guarantee of 50K for the first year, Megan seems like she has found what she was looking for in the tank.

What happened after the shark tank?

Although Megan Cummings’ deal with Mark Cuban on air never came through, she continued to grow her business regardless. After their unsuccessful negotiations, Herjavec offered her 50% of his company; however, she turned him down. The Shark Tank has a lot more to it than meets the eye.

The deal went sour caused an uproar in the media against Herjavec, and he responded by pointing out that there was due diligence involved in this process. Still, we can see how weak this excuse sounds given all of Cummings’ disclosures on camera about being a pre-venture business and no longer operational (the You Smell website).

So we concluded that Megan never completed the deal with Shark Tank’s Robert Herjavec. The company appears to be non-existent as their website is gone. Read more.

In this article, we learn about one of Shark Tank’s failures, and it may become a guide for many new entrepreneurs. Megan Cummings tried her best to take her ‘You Smell Soap’ product to success, but in the end, she failed in grabbing any deal with sharks that could have been better!

Reality TV, like Shark Tank, is often overlooked by viewers. Contrary to popular belief, however, some reality shows on television are helpful and offer lessons that one can benefit from. In Shark Tank’s six seasons so far, as aspiring entrepreneurs and business people seek funding or investment for their products or business, they appear in the show while facing a panel of investors-the “sharks.”

Depending on how they make their presentation before the sharks, they may go home with substantial amounts of money invested into their company or no money at all, but at least get some advice about what not to do.